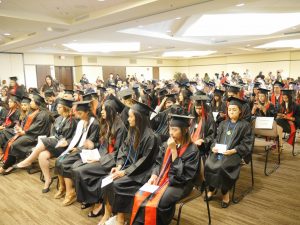 Sponsored by the Compact Scholars Program (CSP), the Division of Undergraduate Studies (DUS) and GEICO, the semi-formal event featured student and guest speakers, awards, and a processional, honoring 75 of the over 400 Compact Scholars who have graduated in fall 2016 or will be graduating in spring 2017 and summer 2017.

As the reception began, guests enjoyed the complimentary hors d’oeuvres banquet and mingled with Dr. Karen Janney, Superintendent of the Sweetwater Union High School District (SUHSD), several Sweetwater teachers, community members, and SDSU faculty/staff. Guests enjoyed a commemorative slideshow featuring photos of the soon-to-be graduates, as well as information about their majors and accomplishments, while music, provided by Django Shredders, an SDSU-affiliated band, filled the ballroom. After eating, attendees took their seats: graduates and SDSU and Sweetwater dignitaries in the front, and guests seated behind them, in the likeness of  a typical graduation ceremony.

Dr. Norah Shultz, SDSU’s Associate Vice President for Academic Affairs – Student Achievement, opened the ceremony with a warm welcome to all attendees. Following Dr. Shultz’s opening speech, graduates Alexa Pazos and Melissa Ayala, presented the Community Champion Award to Mr. Julio Avasan, an Olympian High School math teacher, on behalf of the Compact Scholars Class of 2017. Next, Monserrat Vazquez, another graduate, presented Ms. Georgina Bushnell, a Lecturer in SDSU’s Department of Spanish and Portuguese Language and Literature, with the Friend of the Compact Award. Both awards aim to celebrate and acknowledge community members for making a positive difference in Compact Scholars’ pursuit of success.

Janet Abbott, the Director of the Compact Scholars and Academic Student Success Programs, presented the final award, the Corporate Sponsor Award, to Jill Burner, a regional college recruiter for GEICO. GEICO was honored for their continued support of Compact Scholars, and for sponsoring a portion of the graduation regalia the Compact Scholar graduates received at the reception. 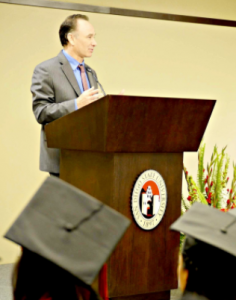 Next, SDSU President Dr. Elliot Hirshman took the podium to congratulate all graduating Compact Scholars. He praised the Compact Scholars Program’s high graduation rate and strong connection to the Sweetwater Union High School District, noting the growing numbers of Sweetwater students attending and graduating from SDSU. He also discussed how valuable the Compact Scholars Program is to colleges and universities across the country because the Compact for Success exemplifies how colleges and universities can partner with local school districts to improve college recruitment, retention and graduation for diverse students.

After President Hirshman wished the Compact Scholars Class of 2017 good luck with their future endeavors, the Compact Scholars Program Senior Speaker, Carolina Rosario Mozee, offered encouraging words to her fellow graduates. She applauded their effort and hard work to achieve the success of graduation, and asked her classmates to stay motivated and continue working hard past graduation. Her speech ended by reminding her peers: “Whatever we do, and wherever we go, never forget that together, we are the story of success.”

After Carolina’s speech, Janet Abbott led the presentation of graduates. Like a traditional graduation, students stepped up row by row to have their names called and received a certificate marking their graduation from the Compact Scholars Program. During the processional, graduates were able to also take a professional graduation photo in their cap and gown before shaking hands with Janet Abbott, President Hirshman, and Dr. Janney, as well as Eric Rivera, the Vice President for Student Affairs at SDSU, Dr. Vitaliano Figueroa, the Associate Vice President for Student Affairs, and Wendy Aleman, Director of the Compact for Success Office at SDSU. Before returning to their seats, graduates were each able to pause and take a photo with President Hirshman.

Following the processional, Compact Alumni Speaker Ellese Carmona (Class of 2012) concluded the reception by discussing the immense value of her time at SDSU, as well as her participation with both the Compact for Success and Compact Scholars Program. Five years after receiving a Bachelor of Science Degree in Microbiology from SDSU, Ellese is on the verge of completing a Ph.D. in Biological and Biomedical Sciences at Harvard University. Ellese expressed her gratitude to SDSU and the Compact for Success, and encouraged the graduating class to continue to work hard and believe that they are destined for great experiences. She encouraged students to never give into the “Imposter Syndrome,” which she explained as the sentiment that one might not deserve the opportunities they receive, educational or otherwise. She reminded graduates that if they are offered a great opportunity, they should feel confident that they deserve and worked hard for it. She advocated confidence over allowing the “Imposter Syndrome” to derail one’s success.

After the reception, the soon-to-be graduates gathered outside the Alumni Center for a group picture. Despite the unrelenting sun and heavy, full-body cap and gowns, each graduate was beaming. 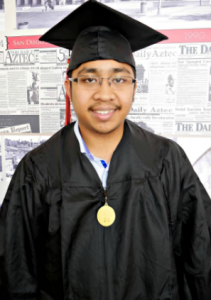 Ramil J. Tan, a graduating Compact Scholar, really enjoyed the services offered by both the reception and the Compact Scholars Program in general, saying, “The ceremony was really awesome. The whole program felt like a miniature version of the whole thing!” As a Computer Engineering Major with a Minor in English, Ramil admitted that CSP resources were necessary for his success in college; “The program helped me by teaching me the basics of how to build a resume as well as building communication skills.” Once he graduates, Ramil hopes to secure an internship or job in his field.. 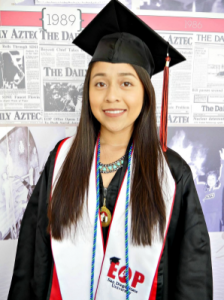 Graduating Compact Scholar Liliana Morales, a Spanish Major with a Minor in Counseling and Social Change, is relieved to be finished with her undergraduate studies, sharing, “I feel extremely happy now that I’m done with college because I’ve worked really hard to get here. The Compact Scholars Program helped me stay on track with school. I learned a lot here at State and I’m really excited to go out there and put into practice everything I learned.”

When asked about how she thought the reception went, Liliana said, “I really enjoyed the ceremony! The atmosphere was great; everyone was very friendly and had big smiles on their faces. I also really enjoyed listening to the guest speakers and seeing all the awards given to those who make a good impact at SDSU. Something that I liked the most above all is how they took a picture of us with our certificate; I thought that was a great idea!” After graduation, Liliana looks forward to continuing her education at a nursing program here in San Diego.

The Compact Scholars Program overall enjoyed a successful 2017 graduation reception and would like to extend a warm congratulations to its graduating class.